The 26th Battleborn, Alani, has made her battleground debut to a tidal wave of enthusiasm from the community. But who is she really? What’s her story? We managed to track down Battleborn Associate Producer, Anthony Nicholson for a few Alani tips and tricks. It turns out that Anthony had a big hand in creating Alani (along with a team of super talented developers), so he knows what he’s talking about! Check out this interview with Anthony to learn more about Alani:

Alani is from the planet Akopos, a planet almost entirely comprised of water. She is a young, yet very mature monk that belongs to an order known as the Emula. A fierce fighter and a peaceful warrior, she was forced to go to the offensive when Rendain and the Jennerit began to syphon the water from her planet. This exterminated the vast majority of her species and left her with a goal to avenge her people and stop Rendain and the veiling of Solus. This is why she started her journey and became one of the Battleborn.

How did Alani’s character come to be?

Alani is Battleborn’s latest and greatest in the Support class. She acts as an attack-healer hybrid that brings a new dimension to the game where the better you are at attacking, the better you become at healing. Alani’s character designer, Grant Kao, did a brilliant job wrapping these two roles into one by using a system that allows you to “fill” your passive ability, which directly affects your heal power, through landing hits on enemies. He also made quite a few augmentation decisions that allow the choice between heavier healing ability and damage, as well as the addition of crowd control effects. All of these things come together like a tidal symphony of power that makes Alani a true force of nature. 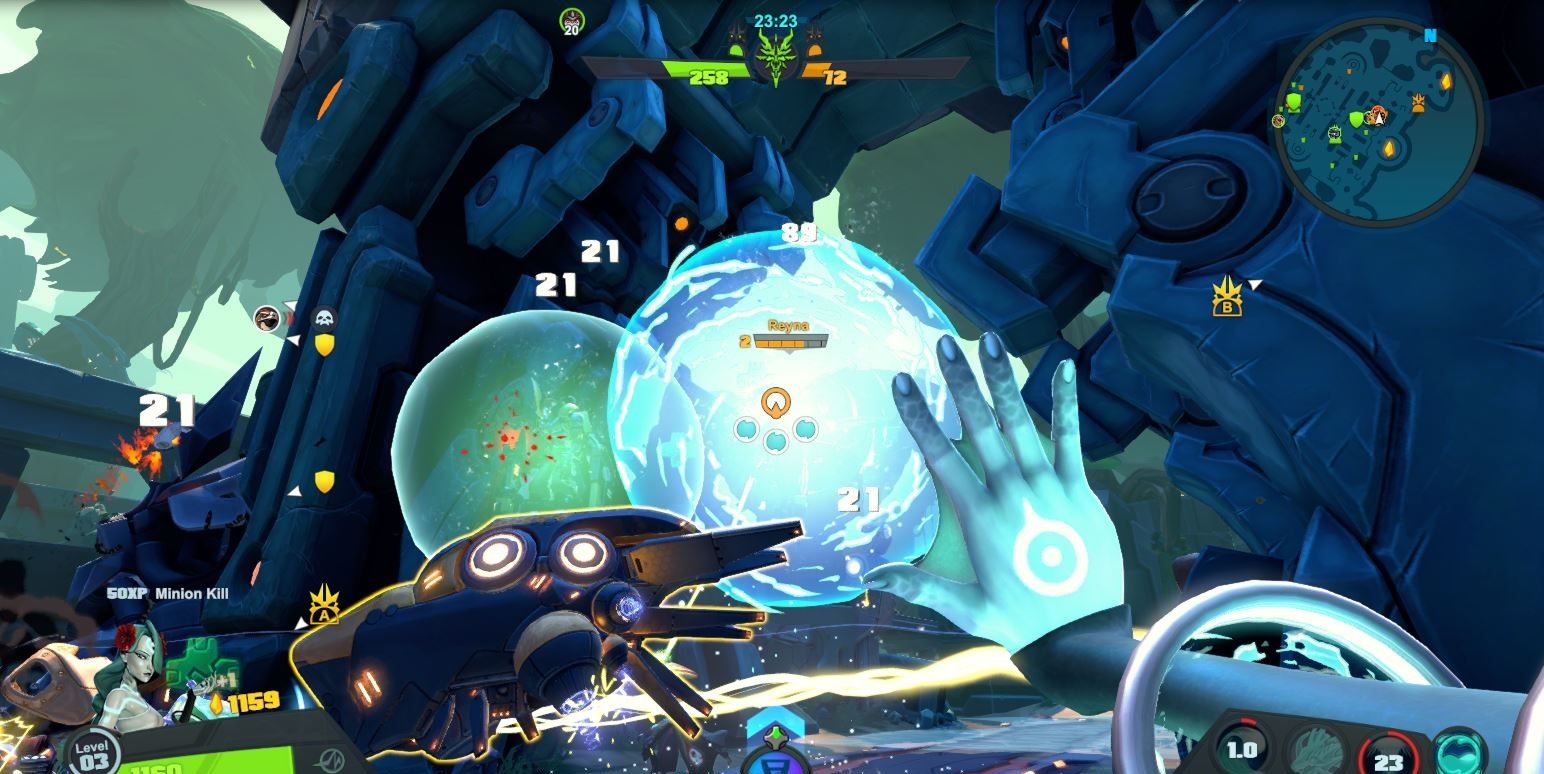 Can you tell us a bit about her abilities and skills?

Some of Alani’s coolest abilities are her geyser that does a knock-up CC using a groundswell of water which when landed will bind an enemy player in a huge bubble! This allows allies to focus on enemies by participating in an intergalactic skeet shooting contest while your enemy is suspended in mid-air and makes for some really interesting team combos. This ability can also be augmented to give the geyser the ability to heal allies, widen its area of effect, and many other really interesting effects with this skill alone.  Another ability I really like is her ultimate skill, Emergence. I really wanted to see a HUGE Water Dragon hitting players and this ability always makes me smile. There is a really awesome mechanic here where the projectile you launch acts as a “sticky time bomb” type of shot, that after a couple of second erupts a gigantic Water Dragon from the ground that leaves an area that does damage over time. What I like to do is throw this projectile onto an ally (YES! AN ALLY!!) Battleborn that has a dash and then have them dash into a group of enemies! IT’s so great to watch that unfold in game!

Some of the best situations to use her abilities in are where you see a lot of enemies clumped together or on the other side of that coin, where you have a few allies in the same area. Alani’s Riptide hastens her allies and can be augmented to slow enemies, apply damage over time and even heal. It is wise to use this ability in big group battles with the added bonus of wave clearing on Incursion and Meltdown maps. Alani’s Geyser is a great tool for pulling enemies out of their skilled abilities and changing the tide. You can trump ISIC’s Rotating Wards, Kelvin’s Sublimate and even Galilea’s Abyssal Form if you are skilled enough to time the eruption just right!

How does Alani fit on a team?

Alani fits in as a healer first so any team composition that lacks a Reyna, Miko or Kleese would greatly benefit from her presence. To take it another step, I like using a team comprised of Caldarius, Attikus, Oscar Mike and Kleese. This team has heavy damage, shield support and some added mobility that allows Alani to heal and get a ton of assists while giving the team a high caliber of survivability.

When Alani is on a team with other Support characters, brace yourself! It will be difficult to take them down when they are together so you will need to make the enemy team scatter. When she has a majority team of attackers, she does well to sit near and direct heal them as well as lay down abilities augmented to increase healing power and healing stimulation on your teammates. In Story missions, she is phenomenal at keeping her allies alive and spreading death using her crowd control and area of effect abilities. 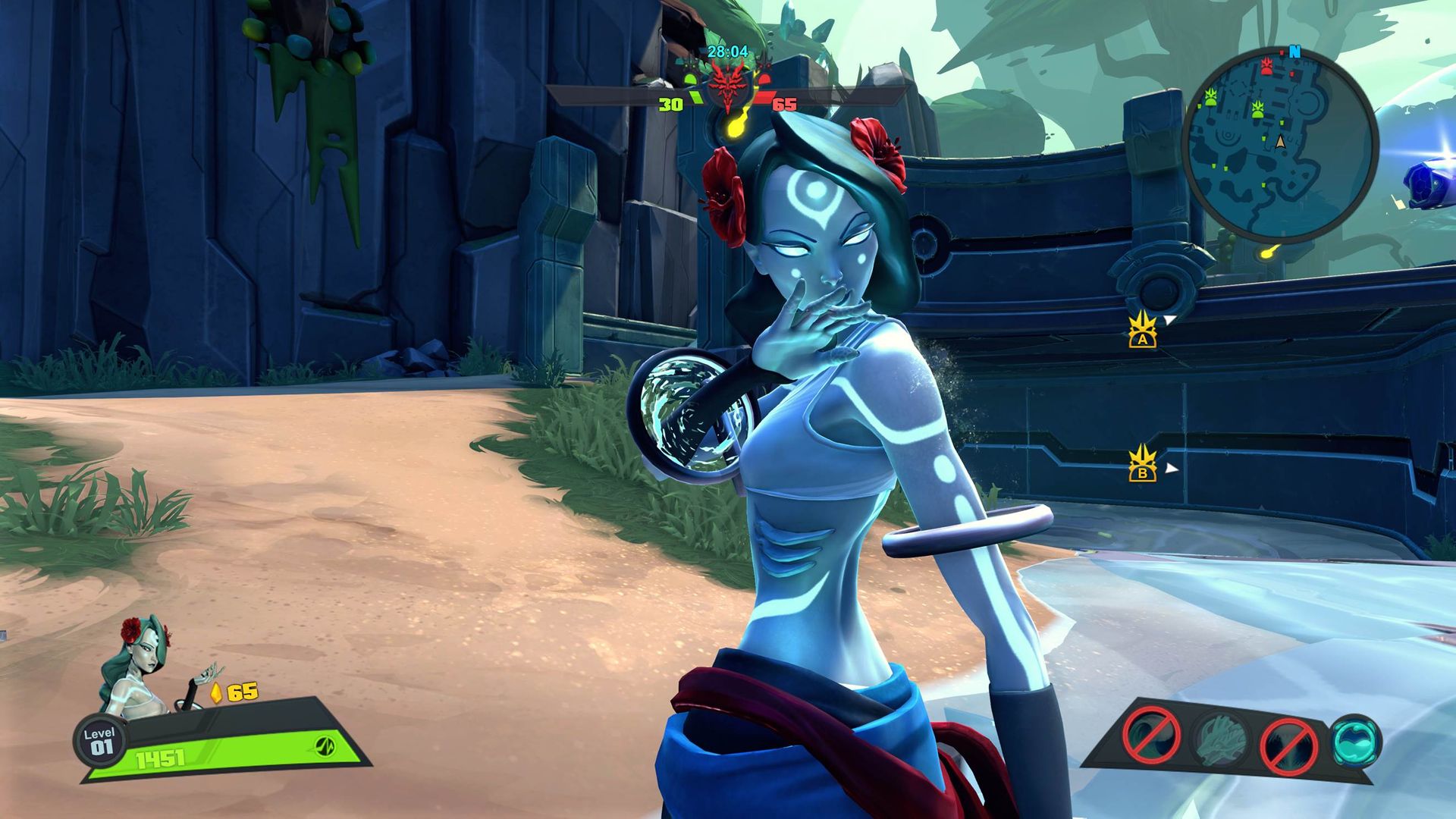 How do you play Alani?

I play Alani in EVERY WAY! I created her to have a huge variety of skills and move sets that Grant really brought to life along with the Animation, FX and Art teams who worked on her, making her readily available for all to dive in. Not a very skilled player? Attack when you can and stay near your allies to heal at will. Oh, you’re a Master of Battleborn? Choose your augments that allow you to increase healing and survivability for your team while strategically using your skills to funnel the enemy where you want them to go. There is no bad way to play Alani! If you want to be a super healer, you’ll want to be pretty good at attacking as well. The way I really enjoy playing her? Anyway that ends with me killing an enemy and taunting! I also like keeping her Osmosis pool filled because when it is, her tattoos and eyes glow and I LOOOOOVE that!!

No matter how you choose to play her, I am confident that you will really have a blast doing so. My goal was to provide a deep background, majestic aquatic beauty, awesome visuals and sick gameplay mechanics to introduce a character like no other to the Solus system and I feel the spectacular Gearbox Design and Creative teams took the plunge and made a dramatic splash!