Next Post // How Battleborn Shoved a Penguin into a Mech Suit

The Eldrid are old. Really, really old. Their knowledge archives are the oldest in the universe. Compelled to understand, catalogue, and preserve the natural order of things, they would be happy to be left alone and quietly conduct their observation-based research. When the Varelsi or Jennerit start bending the rules of space-time though, the Eldrid are anything but peaceful.

The Eldrid are comprised of multiple cultures and races once scattered across numerous worlds. While the timelines of their foundation stretch into the hundreds of thousands of years, scholars generally agree that the ancient Aztanti were the seed race for what eventually grew into the Eldrid. 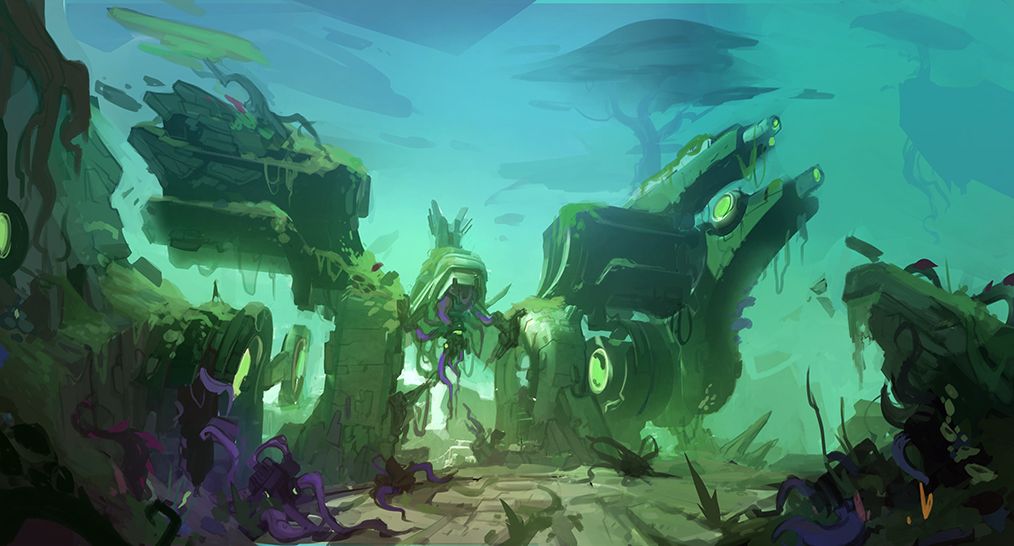 The races of the Eldrid, the Aelfrin, the Ekkuni Dwarves, and other sentient organisms, each have a unique connection to nature. Native to Ekkunar, the stocky and stubborn Ekkuni Dwarves primarily dwell among vast underground tunnels of Ekkunar. They are highly valued among the Eldrid for their incredible innate understanding of botany and geology.

More recently, the tall, agile Aelfrin were driven to re-settle Ekkunar en-masse after their homeworld Eshteni was darkened. Capable of living for thousands of years, the Aelfrin are fervent protectors of the natural order of the universe and are the core race of the Eldrid.

The Eldrid value the natural universe and spend great deals of time – and resources – observing, preserving, and cataloging all that they find. Spreading out across the universe, the Eldrid centered their seat of power on the planet, Codex, the home to massive data troves – a planet-spanning repository of all the knowledge from around the universe, encoded into the very DNA structure of the planet’s massive eliim trees.

Determined to gather knowledge at all costs, they employ numerous research and aid teams to assist other civilizations in sorting out this order. When civilizations are reticent to comply with the Eldrid desires, they are not beyond enlisting the most militant arm of the Eldrid, the Vigilant Order, to put feet on the ground to take the fight directly to the non-compliant.

The Eldrid are often taken as peace-loving nature freaks, but that would be mostly incorrect. To the Eldrid, every star and planet, every living being, every atom, and every beam of light are expressions of a grand cosmic engine; the purpose of life is to understand and maintain that engine. An important distinction here is that reverence of nature is not reverence of life, but refers to the cosmos itself: the natural order of the physical universe.

The Eldrid are chiefly concerned with maintaining the natural order of the universe – the birth and death of stars, the probabilistic rise of life and complexity, and yes, even entropy. They fiercely oppose anything that would disrupt that order, up to and including other factions' efforts to save (or destroy) Solus. The Eldrid despise any being or thing which corrupts or distorts the core rules and laws of the universe. The Varelsi, in many ways, are the epitome of everything the Eldrid hate, and the Eldrid have waged war against the dark mysterious beings for thousands of years.

Learn more about the Eldrid planet, Ekkunar, and the inspiration for their design.