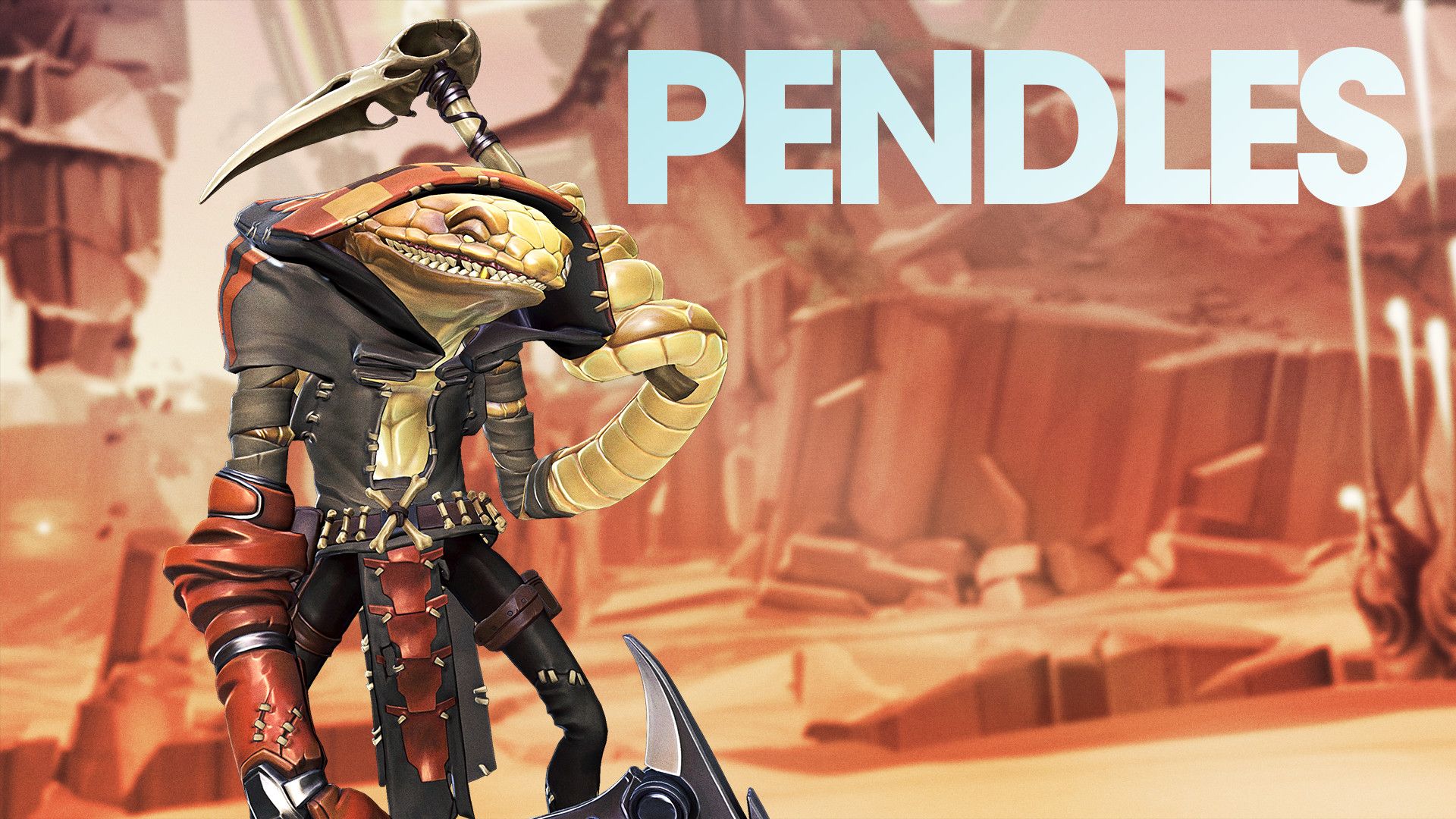 Pendles is now available for Season Pass and Digital Deluxe owners to unlock through the in-game Marketplace with a hero key. It won’t be long before the stealthy, sneaker-wearing, kama-wielding killer, Pendles, makes his full debut for his official release on August 4th, 2016!

Keep reading to learn all about Battleborn’s latest assassin – and get a quick glimpse of the 28th Battleborn hero: Ernest!

Hailing from the same ocean world as his pal Alani, Pendles is a member of the Roa, a traditionally peaceful snake-like race. Adolescent Roa are encouraged to leave home to explore the universe around them, and Pendles did just that. Short on cash and not too impressed with the cultures he encountered, he found much more enjoyment – and money – as an assassin-for-hire.

While Roa go through part of their lives as bipedal creatures, they eventually shed their limbs and return to living beneath the waves. Not Pendles though! He was having so much fun murdering other cultures around the universe that when his natural molting process began, he was very much not thrilled. Suddenly, he found himself without a right tentacle. He put a halt to the process through hormone therapy, then acquired himself a nifty prosthetic arm - greatly improving both his penmanship and high-fives.

There’s no question, this Rogue’s rogue is a cold-blooded killer. With poison, stealth, and an unhealthy inclination for murder, Pendles will sneak up behind you, perforate you with dual kamas, then disappear without leaving a trace. Oh yeah, and one of his kamas is made from the skull of a previous target. The universe is in desperate need of saving and Varelsi are on the doorstep, but Ghalt felt it was safer to have him on the team, than not.

If you want to be a ssssuccesssful ssssnake, take advantage of Pendles’ unique abilities! Since he gains extra movement speed while in stealth, Pendles makes for an excellent shard farmer who can benefit himself and his team by keeping the shard count high. As you zip around the map, pick off any stragglers you see, especially those on low health trying to retreat to safety. When Pendles gets to higher levels, his ability to 1v1 medium and low health characters goes up, making him even more effective at picking off solo players who wander from the group. Lastly, keep moving. Hit someone with Injection and a few melees and run behind a corner to activate Cornersneak.

With Pendles’ ability to be almost constantly in stealth, he may seem overwhelming to play against. However, there are some tips you should follow if you find yourself in need of an edge against the serpentine assassin. Team coordination is a must, when you’re playing against a team with Pendles on it it’s dangerous to go alone. If you find yourself separated from the group, you’re a prime target for a Pendles stealth kill. Specific Battleborn like Marquis, Orendi and Ambra have augments that Reveal enemy Battleborn, so use them to draw Pendles out of hiding when you need. And lastly, try combatting an enemy Pendles with a Pendles of your own. Have him hang around your squishier allies, soaking up XP. When the enemy Pendles initiates combat, that’s your chance to take him head-on!

DUAL KAMAS & THROWING STARS: Slice and dice enemies while dual-wielding kamas or pick them off from a distance with throwing stars.

SNAKE-BORN: This slippery serpent is naturally elusive which grants him the ability to slip out of stuns, snares, and other crowd control (CC) measures faster.

SMOKE BOMB: Toss a smoke bomb on the ground and disappear. *POOF* Those pesky bombs also deal damage over time to enemies in the area.

INJECTION: A good assassin has many tricks up his sleeves. Pendles laces his kamas with poison and strikes enemies for extra damage and slowing them.

MIASMA: Pendles shrouds himself in an airborne poison that deals damage over time and reduced the cooldown on Injection.

(Passive) CORNER SNEAK: Stay out of enemies’ line-of-sight and they’ll literally never see you coming. Pendles’ cloak activates when out of sight and increases his movement speed.

Sporting a grenade launcher and a proficiency for tactful detonation, Ernest is defensive mastermind with a strong devotion to protecting his allies. As the Varelsi scourge darkened system after system, Ernest joined up with the Peacekeepers to put his demolition prowess in service of the universe. A brilliant technician, this demobird will take on any challenge by going right the hell through it! 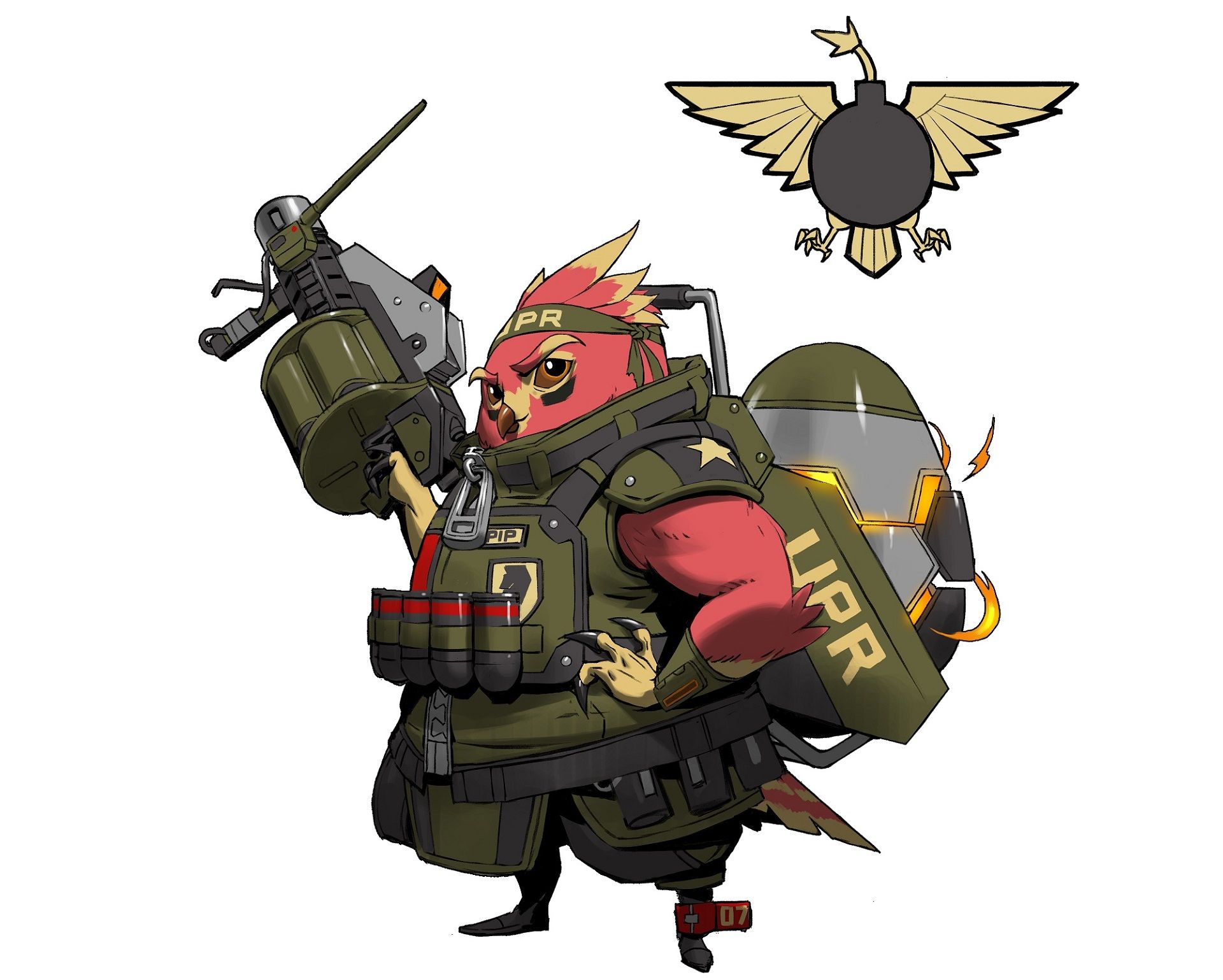 Ernest will be coming in the next couple months as the 28th Battleborn and will be free for everyone with 47,500 credits earned in-game. He can also be unlocked instantly using a (1) hero key, which is included in the Season Pass, saving you the time it takes to earn the credits to otherwise unlock him. We’ll have more info on Ernest, including his abilities and release date as, we get closer to his release.