Next Post // The Detritus Ring: Hideout of the Rogues

Former Peacekeeper engineering chief, Ghalt sent out a call for survivors to help stop the interdimensional jackholes from taking stars – whole stars – and leaving everyone else to fight over the last table scraps of the universe. Now, as the leader of the hastily-formed Battleborn and as the fight to save the last star in the universe becomes more desperate, Ghalt welcomes more battle-hardened warriors to join the fight to save the last star. 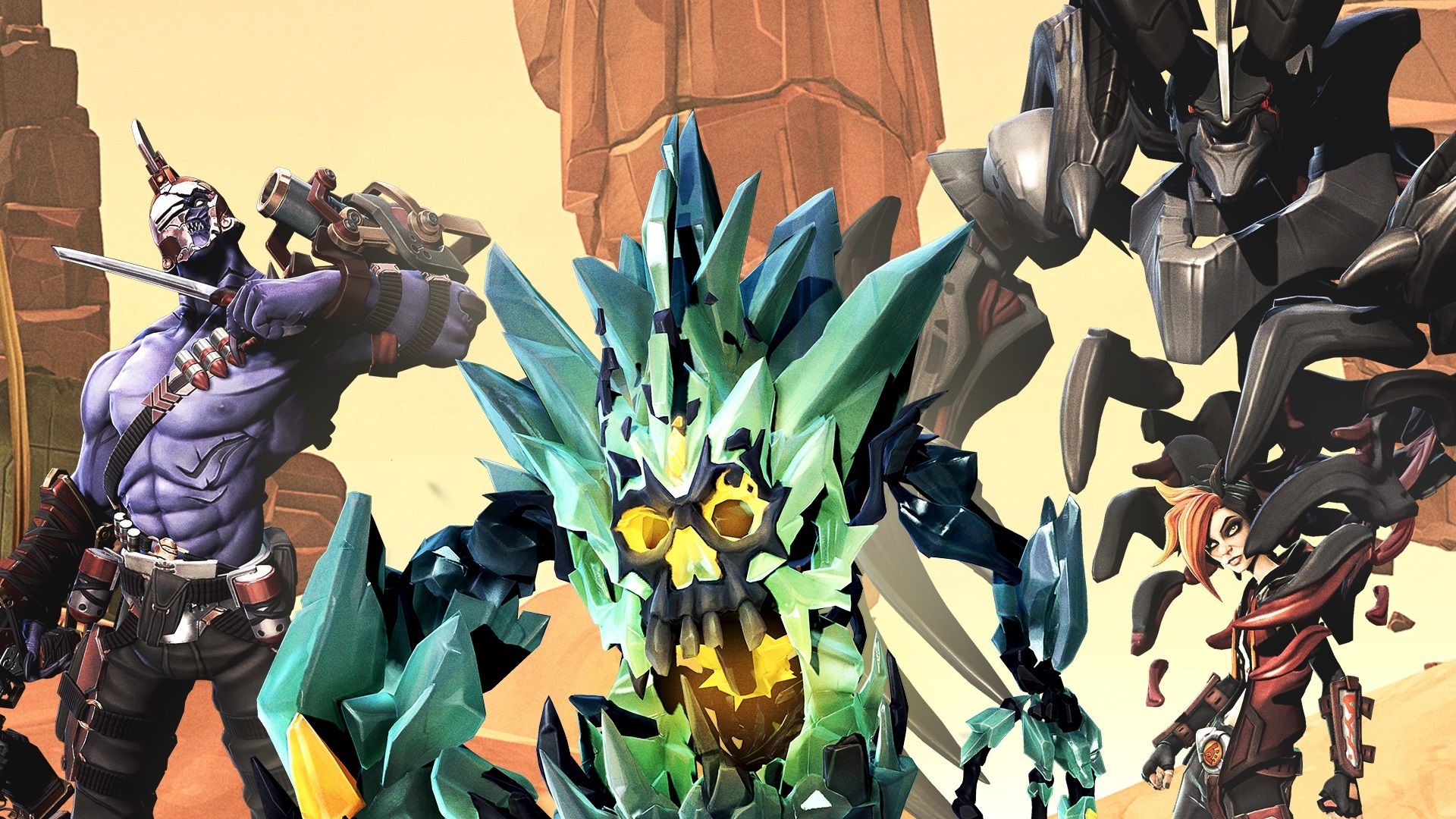 INTERCEPTED TRANSMISSION OF TREVOR GHALT, COMMANDER OF THE BATTLEBORN

People (and some things I’m not quite sure how to classify) are coming out of the woodwork now that I’ve sent the call. This is great, but I need to take better stock of who – and what – we’re dealing with here. After all, a good soldier knows all of the weapons at one’s disposal. So, with that in mind, I want to compare notes with you and see what you think of these new potential recruits.

Notes are as follows:

I know he was introduced to me as one of the early groups of “Mike” clones, but there is something really – I think “off” is the word I’m looking for here – with Whiskey Foxtrot. The only item that I’ve been able to find out about him is a number that keeps coming up in the system: RDC-WF02-1221. I suspect that he has ties to some off-shoot Peacekeeper unit, but all of Whiskey’s gear seems cobbled together, scavenged or, in some cases, reverse engineered Peacekeeper tech.

His tactical assault rifle delivers a ton of punch behind three tightly-grouped shots.

These grenades of his are just wrong. Toss a grenade and it sticks to anything, then detonates after three seconds. On second thought, I’d love to borrow a couple of these for the next time I run into Rendain.

I definitely don’t want to be on the receiving end of the shrapnel-spewing attachment strapped to the bottom of Whiskey’s tactical rifle.

I don’t know how he pulled this off, but Whiskey jerry-rigged some kind of experimental tech into his tactical rifle. When powered up, he can load in an overstuffed clip that can be fired fully automatically.

The few times I’ve seen him in action, I’ve noticed something: After killing an enemy, Whiskey gets a boost to his attack damage.

Miko has to keep reminding me that Kelvin isn’t just some big, lumbering Ice Golem – but, I mean, c’mon, this thing is huge! But it’s also really small. I still have trouble wrapping my brain around the fact that Kelvin is actually an entire, sentient microorganism civilization taking shape as this huge, hulking Golem. Mental note: Kelvin thrives in the extreme cold of space. Bring a jacket.

The sheer force of the golem’s blows are brutal and when Kelvin leans in, it can pound the ground and cause area of effect damage. Good to have when you need a strong front line.

When you have a sub-atomic civilization that thrives in the cold, being able to sublimate for just comes with the territory, I guess. Kelvin can go from golem to gaseous for a couple seconds, speed along and chill anything that gets in its way.

This is a particularly nasty attack where Kelvin bites an enemy and uses a foe’s health against it. If Kelvin kills by biting, he also gets a permanent increase to his health – something about absorbing the enemy’s energy into the civilization.

Being able to manipulate the cold will be a huge asset for us. When Kelvin has enough power stored up, it can create an impassable wall that will also stun nearby enemies.

As Kelvin activates any of his abilities he gains a temporary shield boost.

Ghalt, I’ve got a little project for you – but I’m sure that you’re up for the challenge.

Shayne is pretty much what you expect from an angsty teenage girl staring down the end of the universe: She’s a punk. Hanging around the Detritus Ring in Rogue territory, Shayne’s survived by scavenging, picking up work where possible and grabbing anything that wasn’t nailed down. What I can’t figure out is how she’s somehow bonded with a &^@#(-ing creature and is still alive! These things hover in space and eat energy like you’d slurp a bowl of cereal – and she’s got this monster tethered to her torso! Well, whatever the case, she’s got lots of potential as a scrapper, but a moody kid with that much power? She could be trouble. Useful, but trouble.… I’ll let you handle her.

Shayne’s companion, Aurox, is her melee weapon. And shield. And intimidating pet you don’t want to turn your back on. In combat, Aurox can utterly demolish enemies that get too close.

Whether scavenging for loot among the Detritus Ring, or taking out Varelsi, Shayne relies on her trusty boomerang to pick off enemies from a distance.

When you see Shayne cloak, this isn’t a game of hide-and-seek – you have a five-second headstart to get the HELL away from where you think Shayne and Aurox will resurface and pummel you with damage.

I love it when pets play with you – you know, bring you back a thrown ball or something. But when that pet is all razor-sharp claws, grafted to you, and hauls in your prey… well, that’s a whole other story.

If you see Shayne telling Aurox where to go, it's important to NOT be there. Aurox teleports to Shayne's target and unleashes his rage before knocking everybody around and disappearing.